Palestine: Back to the first Intifada?

Twitter
Nowadays, the Palestinian protests are mainly another reaction to the long-standing oppressive Israeli policies implemented against the Palestinian people. Although one cannot tell yet, whether this unrest will evolve into a third Intifada, several similarities to the first Intifada (1987-1993) are being noticed, as well as some differences. Specifically, the similarities are the Israeli government coalition’s synthesis and its objectives on the eve of the revolts: namely, the economic circumstances of the Israeli economy and its influence on Palestine, due to the interconnection of the two economies; the social, educational and economic status of the Palestinian youth and its role in the revolts; and finally, the stance of the Palestinian leadership. As for the differences, the most noteworthy is the Israeli settlers’ influence on the policy making and its execution.

During the first decades following the establishment of the state of Israel, the Labor party was dominant. Since 1977 and up to the early 1990s, Likud came to dominate the Israeli government coalition. The Likud party, as the offspring of the Revisionist Zionist movement, subscribes to the belief that 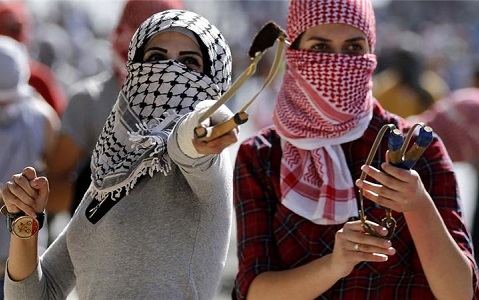 the modern state of Israel should comprise the borders of “Biblical Israel”, i.e. the current Israeli state as well as the territories of the West bank and the Gaza Strip. Hence, Likud considers the promotion of the Jewish settlements, a crucial element in the consolidation of the State of Israel,[1] segregating the Palestinians into limited and isolated areas. On the onset of the first Intifada in 1987, the Prime Minister of the government coalition was Likud’s leader Y. Shamir and his party controlled the key Ministries of Finance, Construction and Housing, Industry and Trade, Labor and Social Welfare, Police and Justice. Even though Likud’s partners, during the First Intifada, consisted of center-left parties such as the Labor party, ultra-orthodox, right and far-right religious parties such as “Shas”, the offspring of the religious Zionists movement “National Religious Party”, “Party for the Advancement of the Zionist Idea”, and “Tehiya” also took part in the government coalition. As a result, there was a significant exacerbation of the policies implemented against the Palestinians. For instance, in 1985 the Israeli Minister of Defense, Y. Rabin, although member of the Labor party, launched the “iron fist” policy, probably under Israeli public opinion’s pressure. The “iron fist” policy led to the interrogation and imprisonment of approximately 250.000 Palestinians. By 1986, the Israeli government further exacerbated its pressure towards the Palestinians, by proceeding with administrative and criminal prosecutions.[2]

The current synthesis of the Israeli government coalition, headed by B. Netanyahu, leader of the main partner Likud, has a similar pattern with the one during the First Intifada. Since 2009, Likud controls the Ministry of Intelligence and periodically the key ministries such as the Ministry of Finance, Defense, Home Front Defense, Immigration and Absorption, Internal Affairs, Jerusalem Affairs and Heritage and Public Security. Furthermore, the current coalition consists of religious and ultra-orthodox parties such as “HaBayit HaYehudi”, “United Torah Judaism” and “Shas”, amongst others. The presence of the ultra-orthodox parties in the Knesset is also reflected in security services. The Israeli policies have fostered the intensification of violence, against the Palestinians. As a matter of fact, the new police chief R. Alsheikh, an ex-Shin Bet (Israel’s secret police) senior officer, is a ‘hardline’ settler who has lived in Kiryat Arba and Kokav Hashahar, two of the most infamous and violent Jewish settlements in the West Bank and has been accused for several crimes against Palestinian detainees.[3] This may explain the further escalation of the Israeli settlers’ violent behavior, such as the arson attack against the Dawabshah family, killing the mother, the father and the 18-months-old toddler, while the four-years-old son was severely injured.[4]

Similarities between the two periods can be traced in the economic sphere as well. Israel’s economy in both periods showed signs of recession. During the period of 1973-1984, the annual GDP growth was 1%, as opposed to approximately 6% from 1948 to 1972. The stagnation of Israel’s economy was further fueled by the increased public debt which reached 300% of GDP between 1978 and 1984.[5] Nowadays, Israel has been experiencing an economic decline, as its GDP growth has been steadily dropping from 5.37% in 2010 to 2.5% in 2015, while the inflation rate has been approximately 0.5% in the last twelve months.[6]

The economic recession of Israel, in both periods, affected directly the Palestinian economy. Given the occupation, the Palestinian economy is deeply interconnected with the Israeli one. By 1987, 40% of the total Palestinian work force (approximately 125.000 workers) were daily commuting to work in Israel.[7] Hence, during the Israeli economic recession in the 1980’s, there was a decline in the Palestinian industrial labor from 15% in 1967 to 10.4% in 1986, in the agriculture sector from 34.3% to 15.9%, in the construction sector from 11.7% to 7.3% and in services from 38.6% to 30.1%.[8] At the same time, the Israeli government implemented restrictions that did not allow the Palestinian people to expand agricultural or industrial units that could compete with the Israeli units. Similarly, the current unemployment rate of the Palestinian people has reached approximately 25% of the total labor force. The GDP annual growth of the West Bank and Gaza Strip was firmly negative between the period of 2000 and 2008, while for the last seven years, GDP annual growth of the West Bank and Gaza Strip has been fluctuating approximately from 0.5% to 15%.[9] Furthermore, after the summer of the 2014 Gaza war, an Ad-Hoc Liaison Committee (AHLC) for the reconstruction of Gaza Strip was formed to address the humanitarian crisis. However, until May 2015, only 27.5% of pledges had been disbursed, making financial weights unbearable for the PA to deal with, leaving little prospects for economic development in the West Bank and Gaza Strip and making everyday life cumbersome for the Palestinians.[10]

The economic downturn affects the Palestinian youth, which undoubtedly has been a key actor, both in the First Intifada and in the ongoing unrest. In the 1980’s, approximately 70% of the Palestinians were under the age of 30. During the first weeks of the first Intifada, there was a lack of central political guidance, due to the detention or exile of the leadership of the PLO-backed institutions. This was a result of the ban of the National Guidance Committee (which was an effort to create a Palestinian democratic body in the occupied territories) and the departure of the PLO from Lebanon in 1982. Meanwhile, the 1985 “iron fist” policy of Israel lead to the detention of the high-rank PLO cadres. This allowed new cadres to emerge and take their place. So, the political vacuum was dealt, on behalf of the Palestinians, with the creation of less formal, but more flexible and effective structures of organization on trade unions and public institutions. Hence, the blend of extremely high percentage of youth among the Palestinians offered the necessary circumstances for mass mobilization, which otherwise would not have been willing to participate under a certain political “umbrella”.[11] Similarly, the Palestinian youth is, so far, a key actor, in the current revolt, mainly due to the lack of central political initiatives and guidance, the extreme youth unemployment that has reached 60% in Gaza Strip alone and the stagnation of the peace-process.[12] Under these circumstances, the Palestinian youth is overwhelmed by the feeling of ‘nothing to lose’ and the obligation to fill the vacuum created by the inadequacy of its leadership to deliver viable solutions.

Initially, the First Intifada was a spontaneous civil unrest against the Israeli occupation and the oppressive policies implemented against the Palestinian people. The Palestinian middle class that opposed the mainstream PLO political leadership, and had autonomous sources of income, had also a vital role in the first Intifada. Specifically, it managed to promote more radical methods of political action and mass mobilization of the Palestinian people. However, once the uprising continued and proved to be durable, the PLO mainstream leadership, under Y. Arafat, made ultimately successful efforts to co-opt the uprising and use it to its end. As a result, serious reactions emerged against that effort, both from political and military factions of the PLO, which thought it was too early to change the spontaneous civil character of the unrest. During the first Intifada, Hamas was formed and emerged as a well-armed, religious (Islamist) rival to the secular PLO leadership, with the ability to erode secular institutions, especially Fatah. Nevertheless, the escalated use of violence by the Israeli security forces sharpened the need of assumption of the unrest’s guidance from PLO and the militarization of the Intifada.[13]

By the same token, the current unrest is a spontaneous reaction of the Palestinian people against the Israeli occupation, lacking any formal political guidance. In fact, it is also a protest of the Palestinian people against the PA’s inadequacy to confront the escalation of the Israeli oppression exhibited mostly by the settler’s attacks against Palestinians and the expansion of the Jewish settlements, making life unbearable for the West Bank residents.[14] Nowadays, the PA’s inadequacy is similar to its inability to deal with Palestinian people’s everyday problems in the mid-1980s. While Hamas is trying to deal with internal cleavages, the residents of Gaza feel frustrated by Hamas’ inability to end the Israeli blockade. Besides, the rivalry between Hamas and Fatah (PA‘s main faction) has further exacerbated the vacuum of political guidance of the current unrest.[15]

One can draw parallel lines between the First Intifada and current unrests in regard to the Israeli leadership’s policies; the manner in which it promotes settlers to the forefront of the conflict, both formally (the presence of the settlers in the security forces) and informally (the tolerance of settler violence against the Palestinians); and the harsh economic circumstances of the Israeli economy, which influence severely the Palestinian economy. In the beginning of both uprisings, the political vacuum left by the Palestinian leadership, forced the Palestinian youth to take the initiative to lead the uprisings against the Israeli forces. Nevertheless, given that the role of the middle class is not clear, it is yet to be seen, whether the current protest will evolve into a Third Intifada and, if so, whether it will preserve its civil character or will be co-opted by Palestinian political or military institutions of Hamas, Fatah or both.