Another brick in the war: Afghanistan’s education system and its instrumentalization by the Taliban 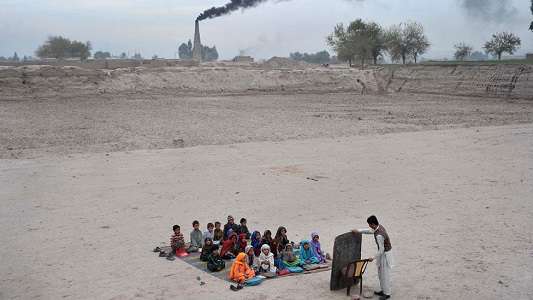 From the rise of the Taliban regime in Afghanistan and throughout the Doha peace talks in 2020, a considerable nexus between education and conflict has been predominant. Firstly, the education system has been directly targeted during the hostilities and, secondly, it has been instrumentalized for the purposes of the ongoing conflict, leading to a vicious circle of perpetuation. The Taliban have contextually adapted their education strategies, utilizing education institutions and positioning themselves as an indispensable actor for the present and the future of education in the country, thus showing a significant change, which at the same time might question some of the group’s core values.

Despite Afghanistan being one of the countries with the youngest population in the world, four decades of war and conflict have left almost one third of Afghan children without school, 60% of them being girls.[1] The education system itself has been a target during the conflict in Afghanistan. Schools have been destroyed or occupied by either the state and international forces or armed groups. Indicatively, UNICEF reported in 2018 that throughout almost four decades of conflict in Afghanistan, more than 1,000 schools had been subjected to military use by both sides because of the conflict. In addition to that, the Taliban have been targeting education personnel, with cases of teachers being subjected to beatings and intimidation. UNAMA’s report for 2020 documented 62 security incidents affecting children’s access to education by damaging facilities or killing, injuring and abducting both education personnel and students.[2]

The Taliban, who came to power in 1996, initially opted for attacking schools for two reasons: firstly, they sent a message of social and economic control over state facilities, undermining the government’s legitimacy; and secondly, they manifested their opposition to what they considered “un-Islamic” behaviors, such as female or secular education. In addition, the Taliban directly targeted education facilities that were used for other purposes, such as schools turned into polling stations during the elections, thus not only opposing what they represented but also proving at the same time that the state was unable to protect them.[3]

The instrumentalization of the education system for purposes of the conflict, along with other factors, such as insecurity, corruption and scarce funding, have stalled education in Afghanistan. Thus, it can be deducted that education and conflict in Afghanistan are solidly intertwined. This interconnection pointed out that that the education system is fertile soil for the dissemination of extremist ideologies and recruitment, ringing a bell to the Taliban’s political leadership regarding their previous approach towards education, igniting a new one.[4]

From opposition to acceptance and co-option

After 2001 and the fall if their regime, a gradual - but significant - shift in the Taliban’s approach towards education has been observed. Various factors led the Taliban to change their education strategy. The mere attacks to education in many cases caused a backlash by the local communities, thus curtailing the Taliban’s popularity, as many Afghans viewed those attacks as offensive to their values and advocated for the opening of more schools, especially for girls.[5] As the Taliban started to realize the importance of the education system for their aspirations, they opted for a policy of instrumentalization rather than demonization of the education system, so as to to pursue the change of its content from the inside.

After establishing an Education Commission in 2010 through layha, the Taliban code of conduct, Taliban-affiliated education officials have been since vigorously regulating both madrasas and regular schools in areas under their control, as well as in government-controlled areas. Furthermore, Human Rights Watch reports that the Taliban use madrasas for indoctrination and military training of young boys. Mainly attracting families with scarce resources, Taliban-controlled schools teach children the use of firearms and IEDs, striving to send them down the path of jihad as perceived by the group, both spiritually and practically.[6] What is more, the Taliban currently seek to ensure the attendance and monitor the performance of both students and teachers, as well as to distribute national and international funding for education.[7]

In practice, the Taliban significantly emphasize on religious teaching. For instance, they have introduced more religious subjects such as Islamic education, jurisprudence and exegesis and they make sure that such subjects are taught early in the school day, when students are more alert. By infiltrating into the education institutions, the Taliban would be capable of preventing the well-feared transmission of “western” or “anti-Taliban” ideas through teaching. Likewise, pro-Taliban education personnel would discourage students who wanted to join public services or national security forces. Instead, the group’s accredited education personnel would have the chance to unleash its discourse of initiation to the “purity” of the Taliban values and potentially recruit young Afghans and deploy them to conflict. This is also reflected in the teachers’ selection process, which in many cases is based on a “casting” by the Taliban officials. The candidates should demonstrate their religiousness, that they have no proclivity of being negative towards Taliban values, and also that they are not tied with government officials or security forces. In the case of schools that are not completely controlled by the Taliban, the teachers might have to sign an agreement with the group, stipulating that they will adjust the curriculum and the personnel to the Taliban’s guidelines.[8]

What is more, a broader control of the education institutions could mean a future investment for the Taliban, at almost no cost, as the funding is mainly foreign and the potential benefits could be used in the group’s favour. Additionally, by investing in education, even indirectly, the Taliban could gain significant legitimacy among the Afghan people, raising their popularity and acceptance within their domestic audience and constructing the image of a regressive and affective service provider.[9]

A paradox that has arisen from the shift in the Taliban’s education policy, is the dilemma between ideology and pragmatism. The alignment with the strict interpretation of the sharia under the Taliban has been the pillar of the group’s approach to education for many years. Nevertheless, the Taliban seem aware that they have to set aside some of their ideological guiders in order to gain the desired legitimacy, both domestically and abroad.

The clues have already been given. The Taliban seem to increasingly welcome female schools, as well as the need of more “contemporary” courses alongside the religious ones, something that was explicitly criticized and even targeted before, according to the group’s moral codes. Additionally, their leadership seems willing to initiate dialogue with international organizations. Α watershed moment that reflected the Taliban’s global aspirations through the shift in its education policies, was the initiation of the talks with UNICEF. Reaching an agreement with a UN Agency, for a non-state group, undoubtedly boosts its international legitimacy, recognition and political ambitions.[10] Given that more international actors are involved in the education sector in Afghanistan, from USAID and UNESCO to smaller NGOs, it would be an interesting development if the Taliban finally initiated talks with them, considering that such entities have constantly been targeted in the past and declared as “infidels”.[11]

Considering that foreign forces have already started their withdrawal from Afghanistan, the Taliban might aspire to maintain and expand control of the education system, which is currently heavily dependent on foreign aid. After all, the group seems willing to prove internationally, through its education strategies, that it can implement more effective policies than it did in the 1990’s. It should be noted, however, that the openness that the group is lately manifesting could be of a temporal nature in order to be considered an adequate policy maker. In the long-term, the Taliban might retreat to their previous indoctrination-oriented education policies.

“I don’t need no arms around me”

Looking into the current situation in Afghanistan, it can be inferred that the education system is still being significantly instrumentalized by the Taliban. The group seems well aware of the importance that efficient and neutral education institutions hold, for the mitigation of the conflict. They also seem to understand the changing dynamics, on both a domestic and global scale, adapting their policies accordingly beyond ideological barriers. That way, the Taliban conserve their significant control over the education system, assure their participation in the discourse for future policies in Afghanistan and demonstrate that their tight involvement maintains the nexus between education and conflict rock steady.

Even though the number of children enrolled in schools has almost doubled from 2003 to 2017, it should be taken into consideration that these children were born amidst the conflict, and hostilities is the only thing they have known. Consequently, the brain drain phenomenon is emerging in Afghanistan, in terms of the Afghan youth deciding to study abroad with no intentions of returning to their home country and contribute to the nation building process. Education in Afghanistan still seems trapped in a vicious circle of conflict and violence. The way out might be leaving illiteracy behind for good and establishing an education system that preaches peace, instead of war and the separation of education from whatever that makes it part of the conflict, be the direct attacks or actors that instrumentalized it in their favor.[12]