The Kurds and the new U.S. administration: Is Trump bringing a change? 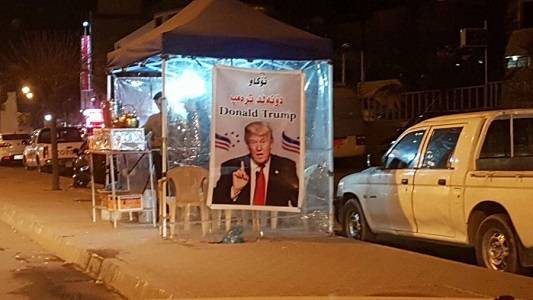 The elevation of the Kurdish forces in Iraq and Syria in the last years to strategic partners of the U.S. in their fight against the Islamic State has generated new hopes of an independent Kurdistan. However, the empowerment of PKK-related forces has upset Turkey, an important U.S. ally. The Trump administration has claimed to aim for future stability and is seeking to rewarm ties with Turkey, meaning a possible end of partnership with certain Kurdish groups, although some of Trump's policy advisers seem favorable towards a Kurdish independence in the KRG under the right conditions.

The United States’ sympathy towards the Kurdish population began more than two decades ago, when reports on Saddam Hussein's genocide against the Kurdish population gained widespread attention. However, the Kurds have been frequently seen as a means to further US interests in the region, but their group's political objectives were not supported by their partners; believing that Kurdish independence would lead to more violence, the U.S. refrained from helping the Kurds in that direction; However, the American support of the Kurdish forces since 2014, and their promotion to key allies in the fight against the Islamic State, has empowered them in ways the U.S. cautiously resisted in the past. This was due to a shift in American foreign policy, which focused on short-term problems, such as the defeat of the Islamic State, rather than the long-term ones, such as the future of the Kurds.[1]

When the Islamic State launched offensives in Iraq and KRG in 2014, the Peshmerga regrouped and fought back relatively quickly, compared to the Iraqi forces. The U.S. saw in the Kurds an effective partner in the fight against the Islamic State, and soon the legal notion that armed and financial assistance of the Kurdish forces should come via the national government (ie Baghdad), were sidelined. Similarly, the Syrian Kurds, and more specifically the People's Protection Units (YPG), soon proved to be the most effective fighters in the defence of Syria against the Islamic State, and in 2014 were assisted by a U.S. air campaign. Without a clear alternative, the YPG soon became a key factor for the American Syrian policy; by late 2015 the U.S. provided close air support for YPG forces in offensives against the Islamic State through the Syrian Democratic Forces (SDF), a partnership of the YPG with small numbers of Syrian Arab fighters.

However, the balance between the two major political parties within the KRG, the KDP and the PUK, has been disrupted by recent developments. In May 2016, the PUK and the Gorran Movement, a group which detached itself from the PUK in 2009, signed an agreement opposing the continuation of Barzani's rule without a mandate; together, they hold more seats in the KRG parliament than Barzani's KDP (30 and 28, respectively), albeit with the parliament being in recess since 2015, while the latter refuses to recognize the PUK-Gorran alliance.[2] What is more, the PUK has made significant military contributions, especially around Kirkuk. The KDP on the other hand lost much of its support in its western territories, where Yazidis and other locals remember their abandonment from the KDP' s Peshmerga in July 2014 during the advent of the Islamic State - although those who benefited politically by this was not the PUK, but the PKK and YPG forces. Even though the Kurdish forces were able to expand their influence in most of the disputed areas with the central government in these years, this internal fragmentation is likely to affect their gains in the post-Islamic State period.

This shift in the balance of power is unacceptable not only for the KDP, but for Turkey as well, due to the PKK-PUK connection. Kurdish issues have become more salient in Turkey's domestic politics, since the ceasefire between the government and the PKK broke down in 2015. And even though PUK officials highlight the importance of maintaining relations with Turkey, there is significant PKK activity in areas where PUK has political influence, something that makes Turkey question the relation between the two Kurdish parties.[3] From his side, Mahmoud Barzani and his partners are likely to push forward an agenda of autonomy through improving their relations with Turkey. The KRG has become economically dependent on Turkey, as all its oil and gas exports come through this border;[4] in exchange, the KDP offers Turkey a military footing in Iraq. A KDP-lead Kurdistan could be acceptable to Turkey, as long as it suppresses PKK-related rebel activities, in order to please its economic partner as well as to retain power. Nevertheless, the empowerment of Kurdish forces that compete with the KDP, in the political and military sphere is likely to cause further unrest in the near future.

Moreover, the U.S. aid to Syrian Kurds has greatly upset Turkey. A lasting YPG government in Northern Syria is a great threat for Turkey, due to the PKK links with the YPG. Turkey has conveyed to the U.S. that their prime enemy is the PKK, not the Islamic State, and has been proved willing to allow a tacit freedom of movement to the Islamic State as a counterweight.[5] Moreover, it has proposed to the U.S. to provide Turkish troops for a future offensive in Raqqa so as not to deploy Kurdish units.[6] The U.S. administration denies supplying weapons to Kurds, however it accepts sending light weapons to SDF's Arab contingent;[7] even so, it is difficult to keep track of the distribution of those weapons once they are delivered.

The new US president, Donald Trump, could bring a change in the U.S. policy over the future of the Kurds. The election of Donald Trump as the new U.S. president was followed by congratulatory statements by Kurdish leaders in Iraq and in Syria, wishing for more direct support from the U.S. But to what extend his policy differs on the approach to the Kurdish issues is still unknown. While he has named the Kurds as the only group that fought effectively against the Islamic State, it is unclear whether this acknowledgement or a possible cooperation will be translated into support for their political objectives.

At the same time, a number of Trump's foreign policy advisers seem supportive of a Kurdish independence under the right conditions. More specifically, the appointment of Rex Tillerson as the new Secretary of State is considered an important asset to the Kurdish claims, because as a former CEO of Exxon, which stroke a deal with the KRG directly in 2011, he is likely to pay attention to the Kurdish oil and see potential benefits in a Kurdish statehood.[8] What is more, it is doubtful that Trump will stand in the way of Iraqi Kurdish independence should Iraq or Turkey agree; a negotiated settlement between Baghdad and Ebril is less likely to re-militarize any future dispute between them,[9] and there is also a chance of Turkey seeing the benefits of having an independent Kurdish state, economically dependent on Turkey, as a buffer against Arabs and Iranians. Thus, it is possible that the previous U.S. “One Iraq” policy will be challenged by the Trump administration. Nevertheless, it unlikely that the U.S. will forward an agenda of Kurdish independence on their own, despite the high expectations raised by the Kurds, as Trump claims his policy will be based on stability, not democratic values.[10]

The situation for the Syrian Kurds is far more obscure. Albeit being good partners in the fight against the Islamic State, the PYD is not considered able to bring future stability in the region. If anything, the Syrian Kurds are stuck in a limbo, where both regional autonomy and reintegration to the Syrian state under Assad rule seem unlikely. This is indicated by the fact that the PYD was not invited to the recent, Russian-organized meeting between the regime and other minor Kurdish groups, raising concerns about Damascus intentions.[11] In addition, a plan of the Obama administration to arm the Kurdish forces in the operation to capture Raqqa, was shelved by the new Trump administration.[12] This could be a sign that the new administration is reluctant to arm the Kurds in fear of supporting them and angering their Turkish allies; however it could also mean that they wanted to reconsider certain other options before deciding on who will lead the Raqqa operation. While American and Syrian-Kurdish interests aligned over the past two years, divergence seems a big possibility, regardless of their cooperation in the counter-terrorism operations.

What is more, Trump has expressed a desire to reset relations with Turkey, which were estranged during the Obama administration alongside Kurdish forces. Yet Turkey has already set out its terms for cooperation with the new president, expecting him to halt supply of weapons to the Syrian Kurds, although the U.S. administration denies doing so.[13] A closer relation between U.S. and Turkey will significantly damage the forged partnership between the U.S. and the Syrian Kurds, particularly the PYD. Even if Donald Trump claims that he is able to reconcile the two parts,[14] at the end of the day, if a conflict occurs between Turkey and the Kurdish allies, the U.S. is far more likely to side with the Turks; trading a key, powerful ally for a minor power with uncertain future is against president Trump's goal of future stability in the region.

In a nutshell, the Kurds should not rely on the current U.S. administration to grant them their independence. For the KRG, a homegrown agreement with Baghdad, or even with Ankara, is more likely to bring stability back in the region, than an externally imposed independence that will ultimately create a weak state, a prey for its neighbors. However, the situation for the Kurds in Syria seems grimmer, as negotiations between the dominant PYD and Damascus are unlikely. It is unclear if the cooperation between the U.S. and the YPG will continue, and it is unlikely that the Trump administration will endorse the current political settlement in Rojava. Kurdish forces both in Iraq and Syria have been proven useful for the U.S. operations, but as nothing specific was promised in return, there is no guarantee of a reward after the danger of the Islamic State is ousted.